Format I Own: Digital (pdf)

The extraordinary life—the first—of the legendary, undercelebrated Hollywood director known in his day as “Wild Bill” (and he was!) Wellman, whose eighty-two movies (six of them uncredited), many of them iconic; many of them sharp, cold, brutal; others poetic, moving; all of them a lesson in close-up art, ranged from adventure and gangster pictures to comedies, aviation, romances, westerns, and searing social dramas.

Among his iconic pictures: the pioneering World War I epic Wings (winner of the first Academy Award for best picture), Public Enemy (the toughest gangster picture of them all), Nothing Sacred, the original A Star Is Born, Beggars of Life, The Call of the Wild, The Ox-Bow Incident, Battleground, The High and the Mighty…

David O. Selznick called him “one of the motion pictures’ greatest craftsmen.”

Robert Redford described him as “feisty, independent, self-taught, and self-made. He stood his ground and fought his battles for artistic integrity, never wavering, always clear in his film sense.”

Wellman directed Hollywood’s biggest stars for three decades, including Clark Gable, Gary Cooper, Barbara Stanwyck, John Wayne, Lauren Bacall, and Clint Eastwood. It was said he directed “like a general trying to break out of a beachhead.” He made pictures with such noted producers as Darryl F. Zanuck, Nunnally Johnson, Jesse Lasky, and David O. Selznick.

Here is a revealing, boisterous portrait of the handsome, tough-talking, hard-drinking, uncompromising maverick (he called himself a “crazy bastard”)—juvenile delinquent; professional ice-hockey player as a kid; World War I flying ace at twenty-one in the Lafayette Flying Corps (the Lafayette Escadrille), crashing more than six planes (“We only had four instruments, none of which worked. And no parachutes . . . Greatest goddamn acrobatics you ever saw in your life”)—whose own life story was more adventurous and more unpredictable than anything in the movies. Wellman was a wing-walking stunt pilot in barnstorming air shows, recipient of the Croix de Guerre with two Gold Palm Leaves and five United States citations; a bad actor but good studio messenger at Goldwyn Pictures who worked his way up from assistant cutter; married to five women, among them Marjorie Crawford, aviatrix and polo player; silent picture star Helene Chadwick; and Dorothy Coonan, Busby Berkeley dancer, actress, and mother of his seven children.

Irene Mayer Selznick, daughter of Louis B. Mayer, called Wellman “a terror, a shoot-up-the-town fellow, trying to be a great big masculine I-don’t-know-what. David had a real weakness for him. I didn’t share it.” Yet she believed enough in Wellman’s vision and cowritten script about Hollywood to persuade her husband to produce A Star Is Born, which Wellman directed.

After he took over directing Tarzan Escapes at MGM, Wellman went to Louis B. Mayer and asked to make another Tarzan picture on his own.

“What are you talking about? It’s beneath your dignity,” said Mayer.

“To hell with that,” said Wellman, “I haven’t got any dignity.”

Now William Wellman, Jr., drawing on his father’s unpublished letters, diaries, and unfinished memoir, gives us the first full portrait of the man—boy, flyer, husband, father, director, artist. Here is a portrait of a profoundly American spirit and visionary, a man’s man who was able to put into cinematic storytelling the most subtle and fulsome of feeling, a man feared, respected, and loved.

END_OF_DOCUMENT_TOKEN_TO_BE_REPLACED

HOW TO BUY MUDPIX MAGAZINE

Is this your first time browsing MUDPIX MAGAZINE’s website? Find full information on what this site is and what content you will find here on the About page, and the Tour Guide page.

Quote Of The Month February 2020

The same boiling water that softens the potato hardens the egg. It’s not about the circumstances you’re in. It’s what you’re made of. – Unknown

I have decided on using Gumroad’s platform for selling MUDPIX MAGAZINE on in the future when I have the premium versions created. As they become available, they can be found here on Gumroad. Follow this site, or follow me on Twitter @dtpiix for updates on availability.

Outdoor photography by David Thrift is done primarily at the following locations:

On Lake Harding in Alabama:

On Lake Martin in Alabama:

On West Point Lake in Alabama and Georgia:

When you purchase MUDPIX MAGAZINE (once available), you will enjoy photography by David Thrift from all of these locations. For more info on these beautiful lakeside parks and recreation areas, please search Google if interested. Over time some pages will be added to this website with information about these parks for an improved browsing experience.

Some of my favorite dj pages on Mixcloud. Some others I haven’t listened to, but linked to so that I can check out when time permits.

This website is primarily about photography and art. With that being so, some nudity (of both male and female) content may be found here. Browse at your own discretion. 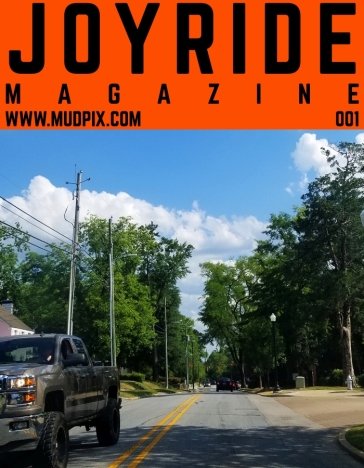 It’s here! The first issue of JOYRIDE. It’s the free digital (pdf) magazine featuring my traffic photography. This issue contains 787 full page traffic photos taken on Friday, May 31st, 2019 throughout Opelika, and Auburn Alabama. Also features bonus close up photos highlighting my favorite shots in this joyride. Spend some time with me out on the road through my photography and see what I saw. Due to it’s file size, this issue is only available for an undetermined limited time. Download it now while it’s available. Check back soon for issue #2.

If you like the magazine and wish to show your support, you may purchase the magazine from PAYHIP here. Your support is much appreciated. In the future, this will be the only option to obtain this issue, so be sure to download it free above if you want to check it out before buying. Either way, enjoy!

Do What You Love

A quote that defines why I do what I do in photography, or art, or anything else I do:

“Love your damn life. Take pictures of everything. Tell people you love them. Talk to random strangers. Do things you’re scared to do. Screw it, because so many of us die and no one remembers a thing we did. Take your life and make it the best story in the world. Don’t waste that opportunity.”

I searched google to find out who said that. I came up empty handed. There’s a dirtier version of this floating on the web, but that’s not the point. The point is, you do you, and fuck what anyone else thinks!

If you’re feeling generous, or snoopy :) Note, some items in the list have been in it since the dawn of time. I may or may not be as much interested in the items as I was when I added them. Also some were added as a placeholder of memories from younger years of my life. I’ll let you know the most coveted item in the list is the Canon SX70 camera. Now you know what I really want.